The picture depicts how the refugees are met when they enter the west, in hope of a better future. They are on the run from a unbearable situation where there needs are not cared for. When they finally stand in front of the border of the western world, they are met with a huge wall and emotionally driven guards.

The theme of the picture is set to a fantasy world about 1000 years ago. This is because we in the west think that the immigrants are physically and mentally stuck in the middle ages. At the same time, this thoughts about the immigrants are old-fashion and out of touch with reality, or just plain fantasy. In the background you can barely see some viking ships in the horizon. They represent what we fear that the immigrants will be like. At the same time, Norwegians are very proud of being descendants of these violent men and women.

The seemingly tall man on the right hand side is Aladdin, who has read the book of Galileo Galilei. The book describes the planets orbit around the sun and was band by the church in its time. The book inspired Aladdin to dedicate his life to science and astronomy and his biggest wish in life is to study the starts and universe at the Griffith Observatory in LA. To reach is goal in life, he must first get passed the guards, which represents the feelings of fear and anger. These are the feelings that keeps us from allowing the immigrants to live and prosper in our country. If he can get passed the guards, a huge wall stands in his way. This wall represents the physical and mental barriers we put between «us» and «them». When he has finally get passed the guards and trough the wall, he then face his biggest challenge yet. Inside the western world there are numerous opportunities to satisfy his every need, but at the same time, there are many temptations that will lure him from his true path.

The outside of the wall has is full of creatures from fairytales that all tell the story of outcasts, like the black swan, White-Bear-King-Valemon and the troll under the bridge. They are there to remind us of our childhood, and how bad we felt for there characters. They also underline that the notion that the immigrants are different from us, are bare fiction.

There are also tiny blue aliens that has entered the woods. They are all busy doing different thing. Some are exploring, some are doing scientific research, while some are just drunk or relax by fishing. They are there to show that even tough someone looks different, does not mean that they are any less advanced. At the same time, they as aliens look similar, but has different motives and drives, just like our neighbors from the east. 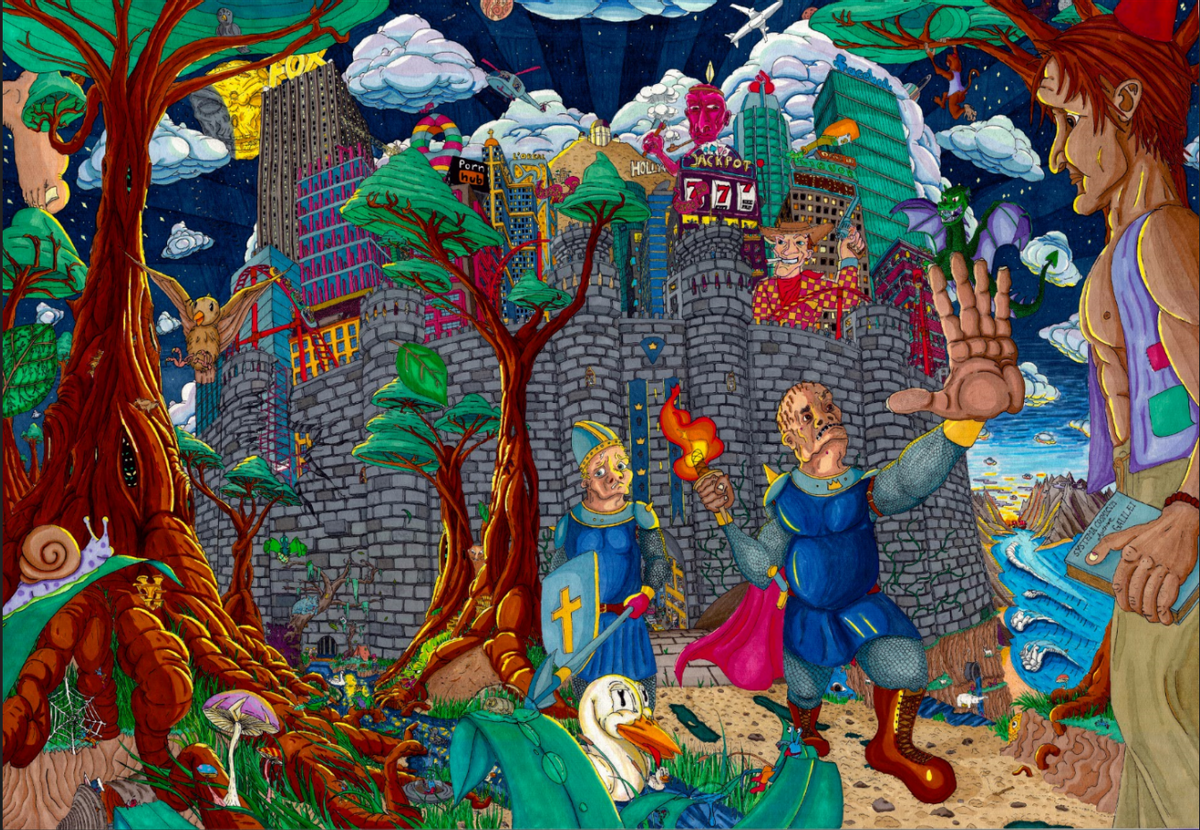